Download for Windows: If you have a GitHub account, the latest pre-built release version of XQEMU for Windows can be downloaded here.

Linux and macOS users will need to build XQEMU from source, see Building XQEMU from Source.

XQEMU is a low-level, full-system emulator which emulates the actual hardware of the Xbox; this means that in order to actually run XQEMU, you must have a copy of the stuff that a real Xbox needs when it turns on:

Unfortunately, distributing some of these items would violate copyright laws, so you'll need to acquire them on your own.

The XQEMU project does not endorse or promote piracy. We don't link to copyrighted files, or discuss how to acquire them. The only legal way to acquire these files is to dump them from your real, physical Xbox. Please don't ask us how to get them.

Xbox 1.0 compatible BIOS (cromwell, 4034, 4036, ...). You can use a retail or debug image. Just like a real Xbox, running an unmodified retail BIOS will not allow booting unofficial software.

You can use a pre-built 8G Xbox HDD image, free of any copyrighted content, and only containing a dummy dashboard. You can download this image from here!

By design, this particular drive image does not contain the official Xbox dashboard, but instead contains only a dummy dashboard. Because of this, you may see an error message when starting XQEMU with an unmodified retail BIOS image due to the system failing to find a properly signed dashboard.

This is the most authentic way to do it. Unlock your drive, connect it to a computer, and dd the entire contents of the drive straight to a file. This file can be used as-is with XQEMU.

You can also create an Xbox hard-disk image using XboxHDM. Directions on how to do this can be found here.

XQEMU is launchable via the command-line interface, or through the XQEMU-Manager GUI.

XQEMU-Manager is a simple application with a graphical interface that allows you to easily configure, launch, and control XQEMU. Currently it is distributed separately from the main XQEMU executable. A binary distribution of XQEMU-Manager for Windows is available here.

Upon starting XQEMU-Manager, you will be presented with the following interface: 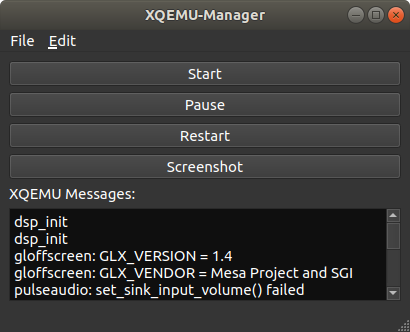 You will need to edit your configuration to let XQEMU-Manager know where XQEMU is located, and where to find the files described above. Navigate to Edit→Settings and you will be presented with the following dialog: 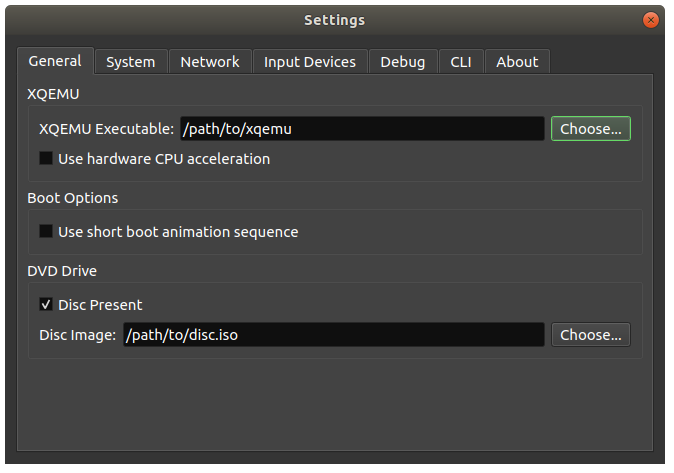 After configuring your settings, close the settings dialog and click the Start button to launch XQEMU.

You can launch with the following command:

Of course, on Windows the executable path will have a .exe extension. If launching a pre-built binary, replace ./i386-softmmu/qemu-system-i386 with xqemu.exe.

Replace the variables $MCPX, $BIOS, $HDD, and $DISC with the appropriate file paths or define them as variables in your shell.

The Xbox boot animation sequence can be bypassed by adding the ,short-animation option to the -machine switch above.